13.May.20 / Kirsten Ballering
The pattern for the Rainbow Sampler Blanket (Part 2) is also available as a print-friendly, styled and advertisement free PDF in the Haak maar Raak shop.

You can find all information about yarns and hook sizes in the pattern of week 1.

You can find Scheepjes Colour Crafter via your local Scheepjes retailer or order online in these webshops:

The wave stitch is a combination of stitches with different heights. By crocheting the first row in waves, and the second row in ‘anti-waves’ you create a wave row. It might look like the grey rows on either end of the wave stitch are wavy as well, but this will rectify itself when you continue crocheting the blanket.

This stitch is worked a multiple of 8, and we have 241 stitches. Because of this, we’ll have one stitch too many after finishing the final wave. So we’ll crochet an extra sc (and in the next row, the ‘anti-stitch’) to sort this out.

Join your yarn with a ss in the first stitch. Crochet a ch and sc in the same stitch as your ss. Next, crochet a hdc, dc, two tr, dc, hdc and sc. This is a wave (photo 1,2). Repeat this until the end and crochet one extra sc (photo 3). Cut yarn and turn your blanket.

Join your new colour with a ss in the first stitch (that’s the final sc of the previous row). Crochet four ch that count as tr. Crochet a tr in the next sc, a dc in the hdc, a hdc in the dc, and a sc in the tr. This is the first half of your anti-wave, and you see the height difference is cancelled out now (photo 4). Crochet a sc, hdc, dc and tr. This is your first complete anti-wave. Continue like this to the end, cut your yarn and turn your blanket (photo 5).

The bobble stitch consists of four half-finished dc’s that are crocheted together. This creates a surplus in volume and thus, a bobble. The first bobble is worked a little differently from a regular bobble.

You want all your bobbles pointing in the same direction. So join your new colour with a ss in the first stitch (not the last!) of the previous row, in your begin-bobble. Crochet three ch that count as dc (photo 8). Make a bobble in the space between the begin-bobble and the second bobble, and make a ch. Keep crocheting bobbles in each space, with a ch in between. Work a dc in the final stitch (photo 9). Cut yarn, don’t turn your blanket.

You can repeat these two rows until you’ve reached your desired height. Don’t forget that all bobbles are supposed to point in the same direction!

These waves are a great way to shake things up a bit. And although we only crochet two wave rows, I’m sure you can imagine how a whole blanket in this pattern would look like!

While you work your first row of waves, your blanket might look a bit wobbly. That actually makes sense, when you think about it. The stitches in one wave repeat varying in height. The nature of crochet is that the top of the stitches want to align themselves as much as possible. Due to the variety in height, the bottom of your stitches (and thus the rest of the blanket) will try and form a wave. This will be sorted out when you crochet the second row of waves. This row is the exact opposite of the first row in terms of height, and thus the forces that pull on the blanket cancel each other out, resulting in a straight wave.

Bobbles are one of several ways to get a slight ‘bump’ in your blanket. In previous rows, we’ve made popcorns. Bobbles are a form of popcorns, but you don’t crochet the stitches together with a slip stitch. Instead, you depend on the height of the individual stitches and the tightness of the stitch to pull the excess yarn forward and make a ‘bump’.

Don’t be alarmed if your bobble stitches don’t really pop. Bobbles only tend to pop if they’re crocheted in between other tight stitches such as single crochets, and have nowhere to go but forward or backwards. Because we’ll be skipping stitches, our bobbles will form a small raise on the backside rather than turn into voluminous bobbles. Because we’re working them on the wrong side, the bobbles will pop to the front. If you can’t get them to pop, they’ll take the shape of little flower petals. In any case, it’s a beautiful stitch to try!

Please note: you’re working these stitches on the WS again, so don’t turn after your previous row.

Your blanket should be able to lay flat while you work on this row. If your blanket starts to wobble a little bit this means that there are too many stitches for your blanket to fit into a straight line. While this can be sorted out to a small degree with blocking (in week 11), we’re not going to bet on that.

The reason why we don’t turn this row is because bobbles are visible on one side and not as much on the other. If you would turn to work your next row, you would see the backs of the bobbles and we want them pointing all to the same side.

You’ll find that the bobble stitch uses a lot of yarn compared to other stitches. And it makes sense when you think about it. For every 2 stitches in the previous row, you make 4 double crochets. So that’s twice as many stitches and twice as much yarn if you disregard the chains in between stitches for convenience. It’s a yarn eater but creates a soft, textured stitch.

I recommend crocheting in the chains between the bobbles, instead of crocheting over it. In my opinion, the end result will be neater. If you find this too cumbersome, then just crochet around it. It will not matter for the stitch count.

This section consists of hdc rows only, making for great TV-crochet. Let the rhythm of the stitches guide you, and you’ll see that you got this section finished before you know it.

Continue with part 3 of the Sampler Blanket Pattern. 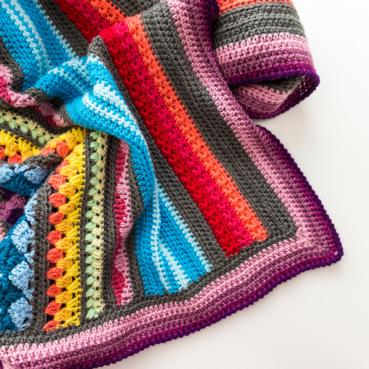 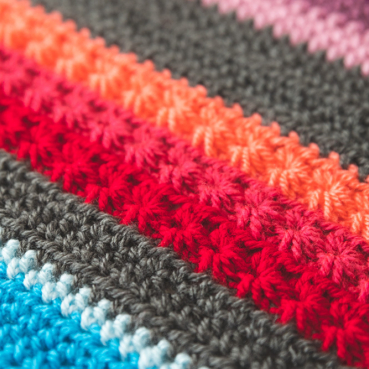 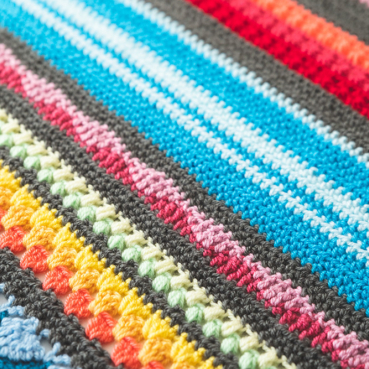 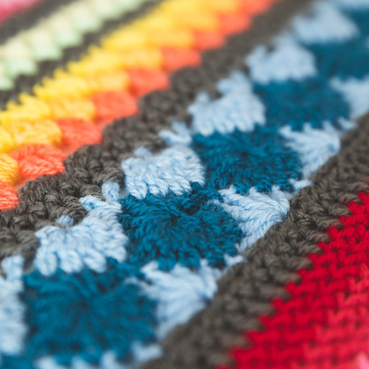 This is the 3rd one of these of have done as soon as people see it they want one . I’m enjoying the new pattern but finding it a challenge getting wool due to Covid . Not sure how this will go as having to substitute many colours ! May 15, 2020 03:36 - Reply
Nerissa

Thank you, Kirsten, for your hard work putting out this gorgeous pattern and the CAL. May I note, however, that I am unable to get the diagram, key, and colours. All I see is a listing where they should be located, so perhaps they have not yet been released. I am looking forward to the diagram in particular as I am learning how to read diagrams. Thank you. May 15, 2020 20:22 - Reply
Kirsten

I'm so in love with this blanket so far and already thinking of making a smaller version once I finish this one. How would you go about reducing the size? Thanks so much for sharing your wisdom! May 17, 2020 12:20 - Reply
marie kasch

Just in the middle of this Part 2 of the CAL. I'm loving it!
Looking forward to finally finishing a blanket. This will be my first one!
Toni Rumbel July 09, 2020 11:53 - Reply
New reply